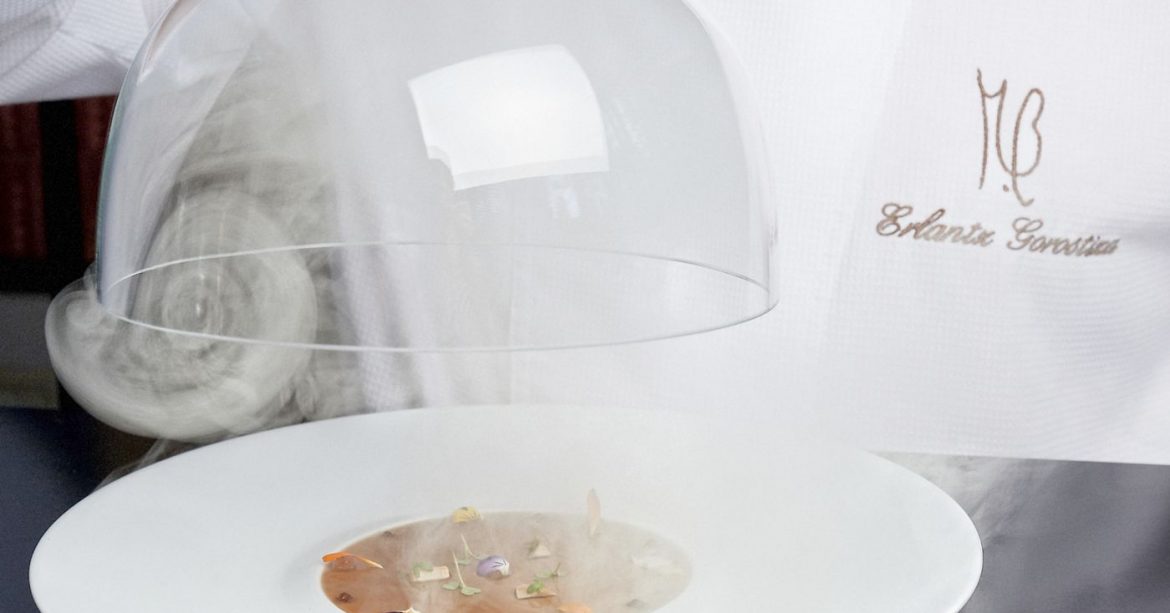 As the Canary Island’s only two Michelin-starred restaurant and the first restaurant on the Islands to earn one, M.B has elevated the fine dining experience in Tenerife to an unprecedented level. The restaurant, led by chef Erlantz Gorostiza, takes diners on a journey that reaches back to childhood and carries them through to the future of gastronomy.

Rooted in Basque cooking but reflecting the restaurant’s international clientele, M.B specializes in tasting menus that include seven to eight appetizers and 10 dishes, many highlighting distinct Spanish cuisine. “We start with flavors that people are more familiar with,” Gorostiza says, “and give them a twist by changing textures, temperatures or flavors. You can expect a meal that’s tasty, powerful and fun.”

M.B offers what Gorostiza calls “author cuisine” because there is a person (in this case people; Martín Berasategui and Gorostiza) who seeks to translate what’s in their head and heart onto the plate. “In the end,” Gorostiza says, “you are creating a memory in a diner’s mind that, given the immediacy of today’s world, has limited capacity. That is the most beautiful part of our work.”

“It’s not very difficult to get food right. You just need to know how to make the most of what you’ve got and improve it.”

Hailing from Spain’s Basque region, chef Martín Berasategui’s fate as a culinary force was set at a young age. At 14 he began what would become a life-long career, learning the secrets of cooking in his parents’ San Sebastian restaurant before spending the next 13 years studying haute patisserie and bread-making in France. Working alongside the country’s top chefs, he sharpened his charcuterie and cooking skills before opening his own namesake restaurant in 1993. That restaurant, bearing the proud mark of three Michelin stars, is one of 12 that Berasategui now manages, including The Ritz-Carlton, Abama’s two Michelin-starred M.B.

“The kitchen is not a job, it’s a lifestyle. Ninety-five percent of everything I do in my life is directly related to gastronomy.”

Growing up in a traditional family in the north of Spain led Erlantz Gorostiza down the path to becoming a chef. He spent time training in Michelin-starred restaurants under Spain’s most renowned chefs, including Martín Berasategui. Gorostiza is known for dishes rich in flavor and high in quality, a result of his respect and care for ingredients. He blends traditional and modern without compromising the elements of either, resulting in plates that are not simply food, but art.